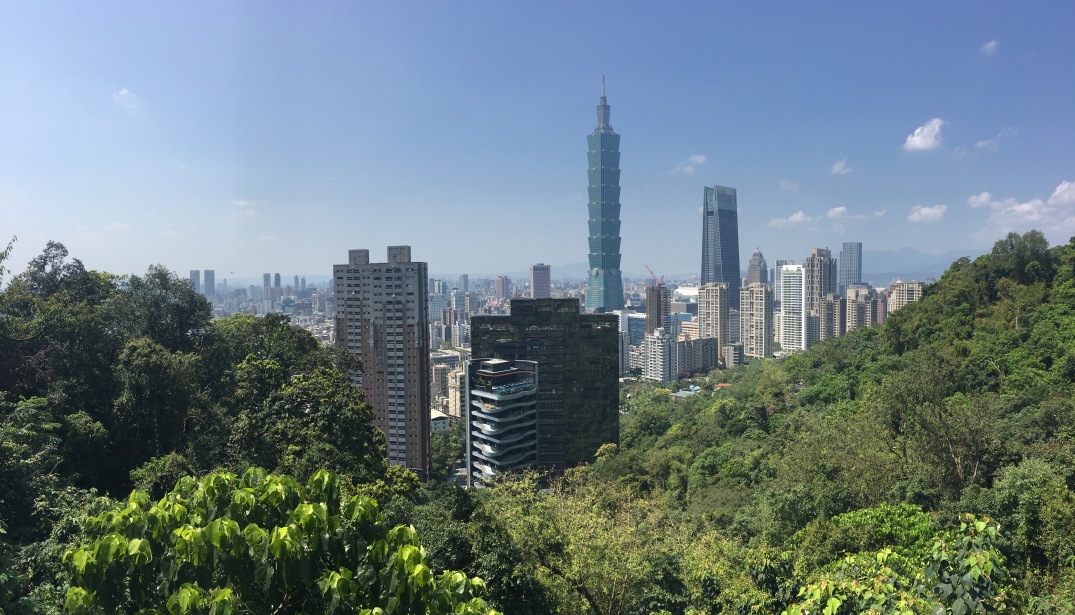 *Note: I typed this blog post in March, but did not publish until June. It takes a while to get organized, people!*

Yesterday, a rare thing happened. Peter and I awoke and left the room by 10 am. WOW! With all of this extra morning-time, we had a full day of Taipei exploration.

After breakfast, we hopped on the Red line to Xiangshan station, which spat us out at Xiangshan Park. A 10 minute walk from here are the steps to the Elephant Mountain hiking trail. 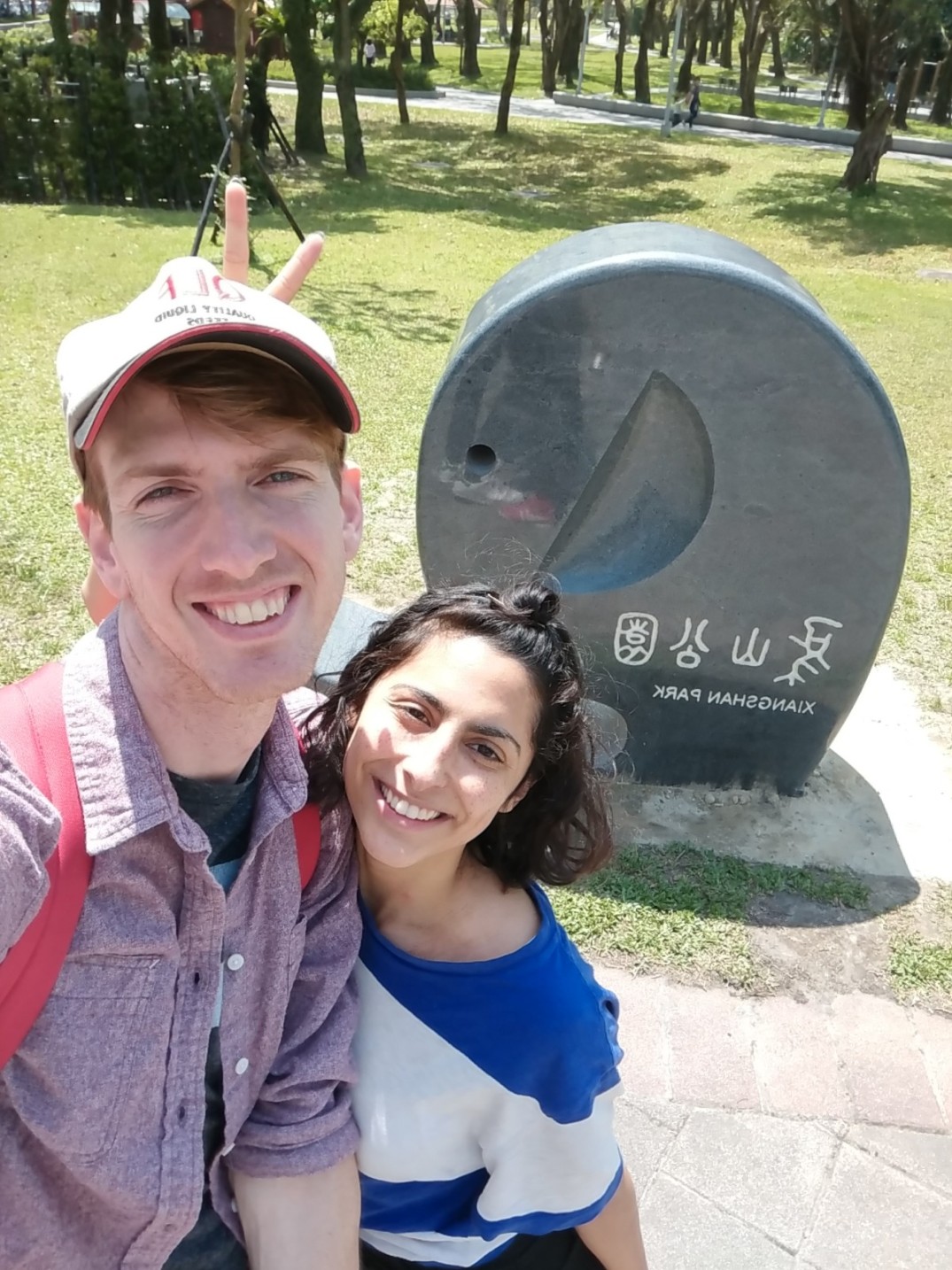 This hike is short and rather easy, which is fortunate because I was still nursing a mild cold. What lacked in difficulty was made up by amount of funny things we witnessed. For example, this man crawling backwards up the mountain.

Immediately after I finished recording that clip, another man ran down mountain backwards. For a brief moment, the two backwards-moving men crossed paths and it was amazing and confusing. We stood there in shock, then laughed uncontrollably. I am still scolding myself for not recording that moment.

We also saw many elderly men and women walking up and down the mountain with canes. Not necessarily a funny sight, but an impressive one. I turned to Peter and confessed, “I don’t think Meme could ever do this walk, yet there are people older than her walking faster than me. What the heck.”

During the hike, Peter befriended a Mormon man with 5 children. (I think his big “TX” shirt screamed “talk to me I’m foreign and friendly!”). The family ended up becoming our low-key hiking buddies. I tried to scare his children while Peter spoke to him about travelling in Asia. That man took this picture of Peter and I. 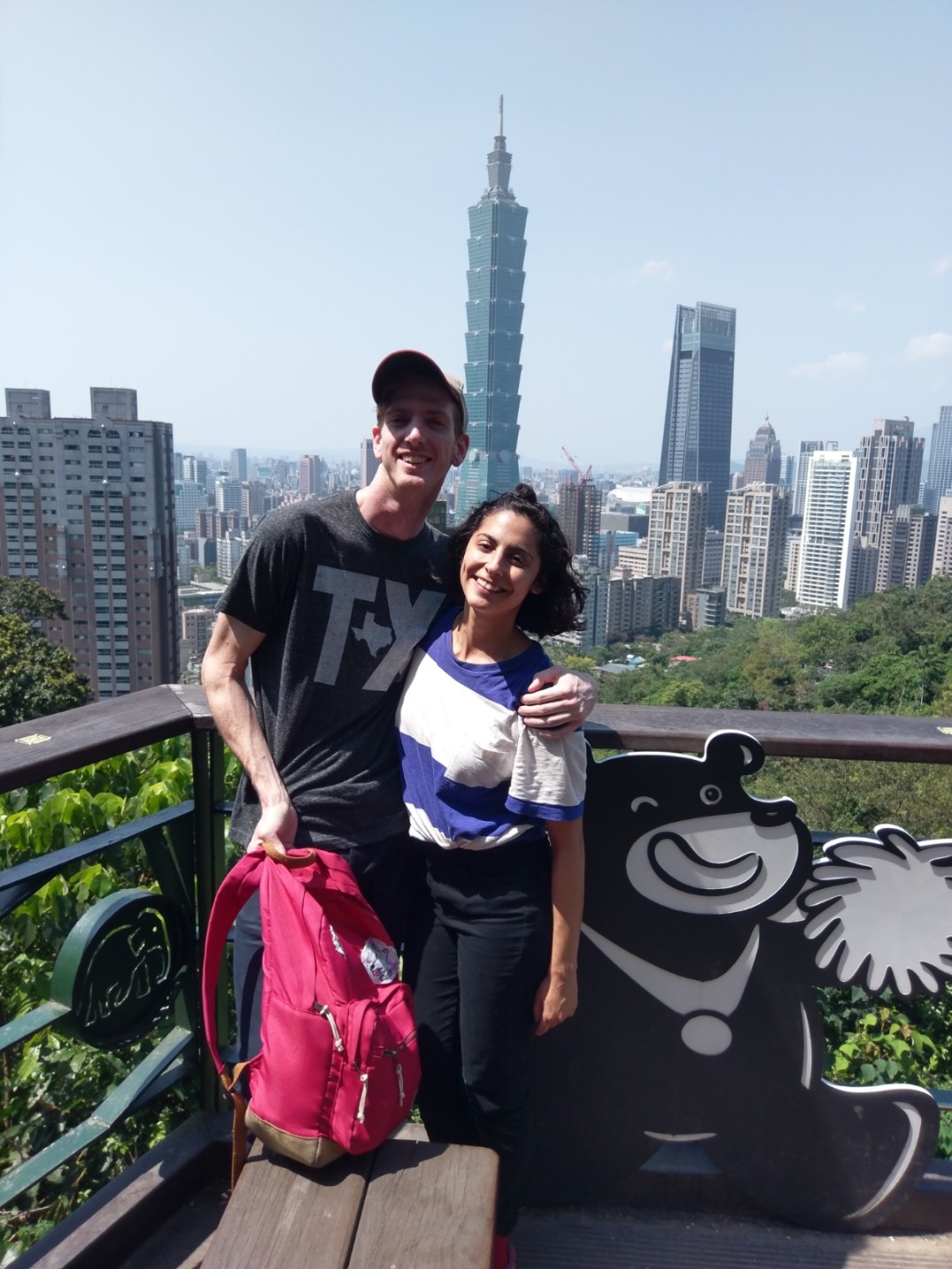 The view from the top of the trail is worth the steep hike. There are a few giant rocks that people climbed atop of to take pictures in front of Taipei 101. It was a long line that I didn’t want to wait in. Instead, we scaled up even bigger rocks – and impressed onlookers while doing it – to take our own pictures of Taipei 101 and surrounding foliage. Here are the results. 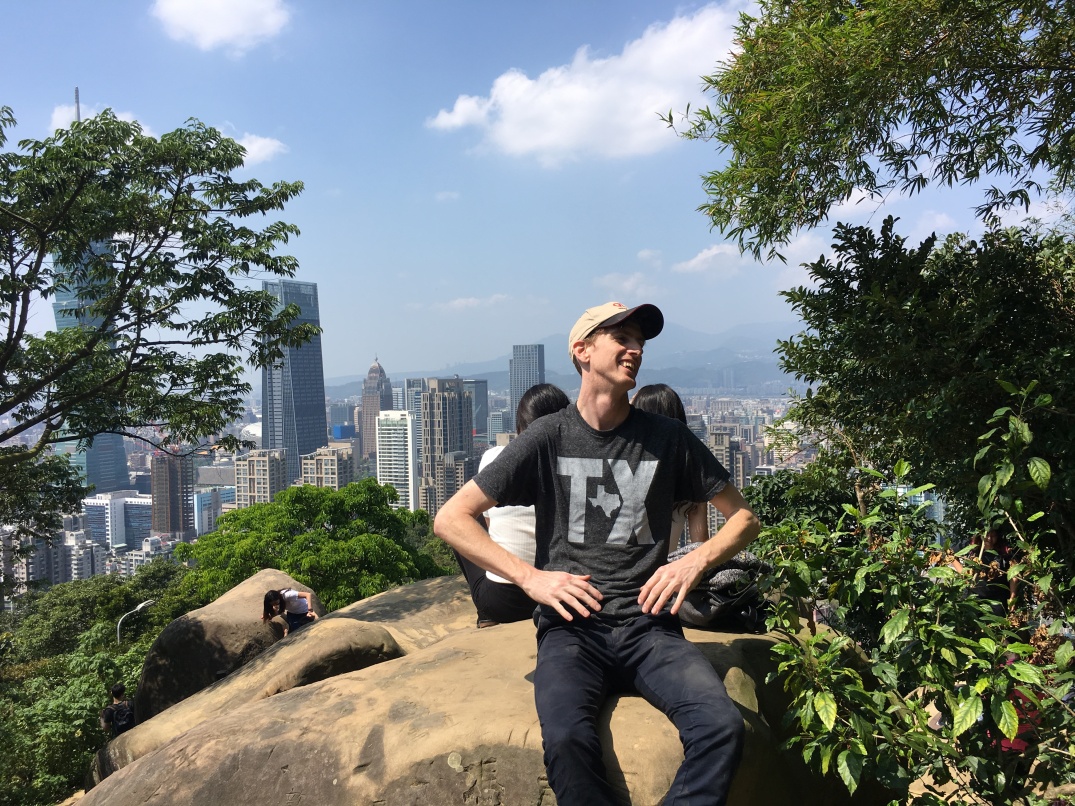 After climbing down the mountain, Peter and I hopped on u-bikes and headed to Taipei 101. In all honesty, it’s boring. It’s just an expensive mall with a food court. It’s sort of lame, but beautiful to look at. After taking this picture and a quick walk through the building, we continued on our journey.

Huanshan 1914 Creative Park is a really cool, trendy, exciting creative art space. We happened across an aboriginal festival, filled with live music and food stands. As we ventured further into the park, we saw some even more artsy/hipster shops selling clothing & knick knacks, Cartoon Network pop-up shop, restaurants, cafes, and a movie theater. I was taken aback by how much there is to do here, and a majority of it is FREE! 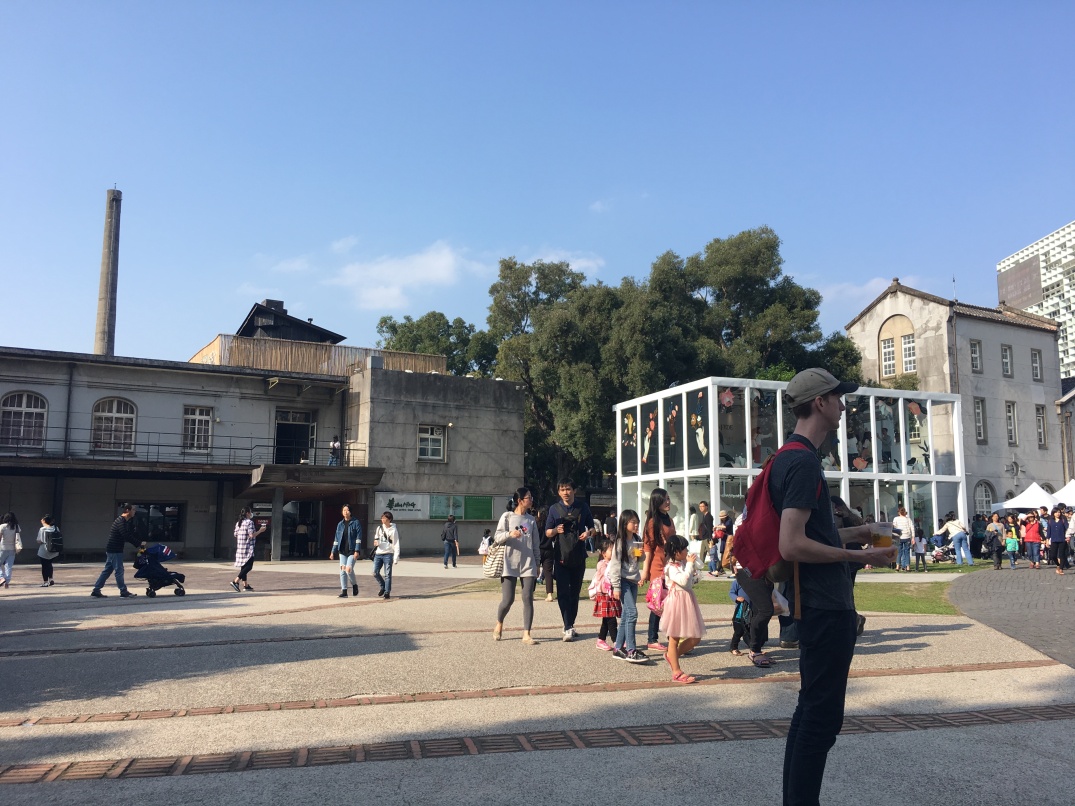 Being a bit of an impetus individual, I decided to walk into a building with this lantern hanging outside. It just looked so welcoming.

The result of an impetuous decision: walking through “Super Cookie Land,” a “dark and weird comedy exhibit.” The artist, I believe named Cookie, is from Japan and he creates some wacky, scary, funny art. I had a blast experiencing his twisted, hilarious art. I even bought two stickers because I had to take home some of his vision. 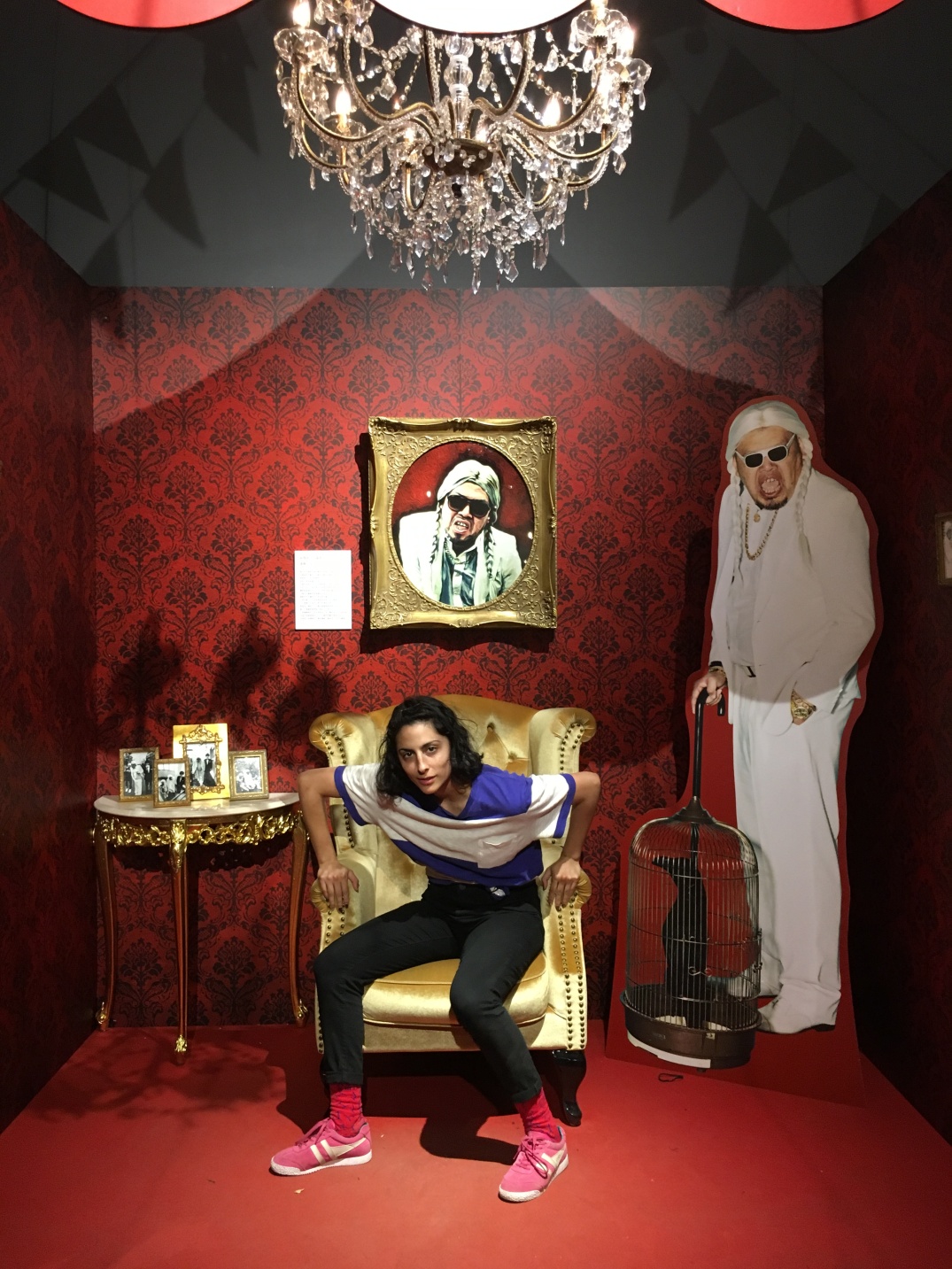 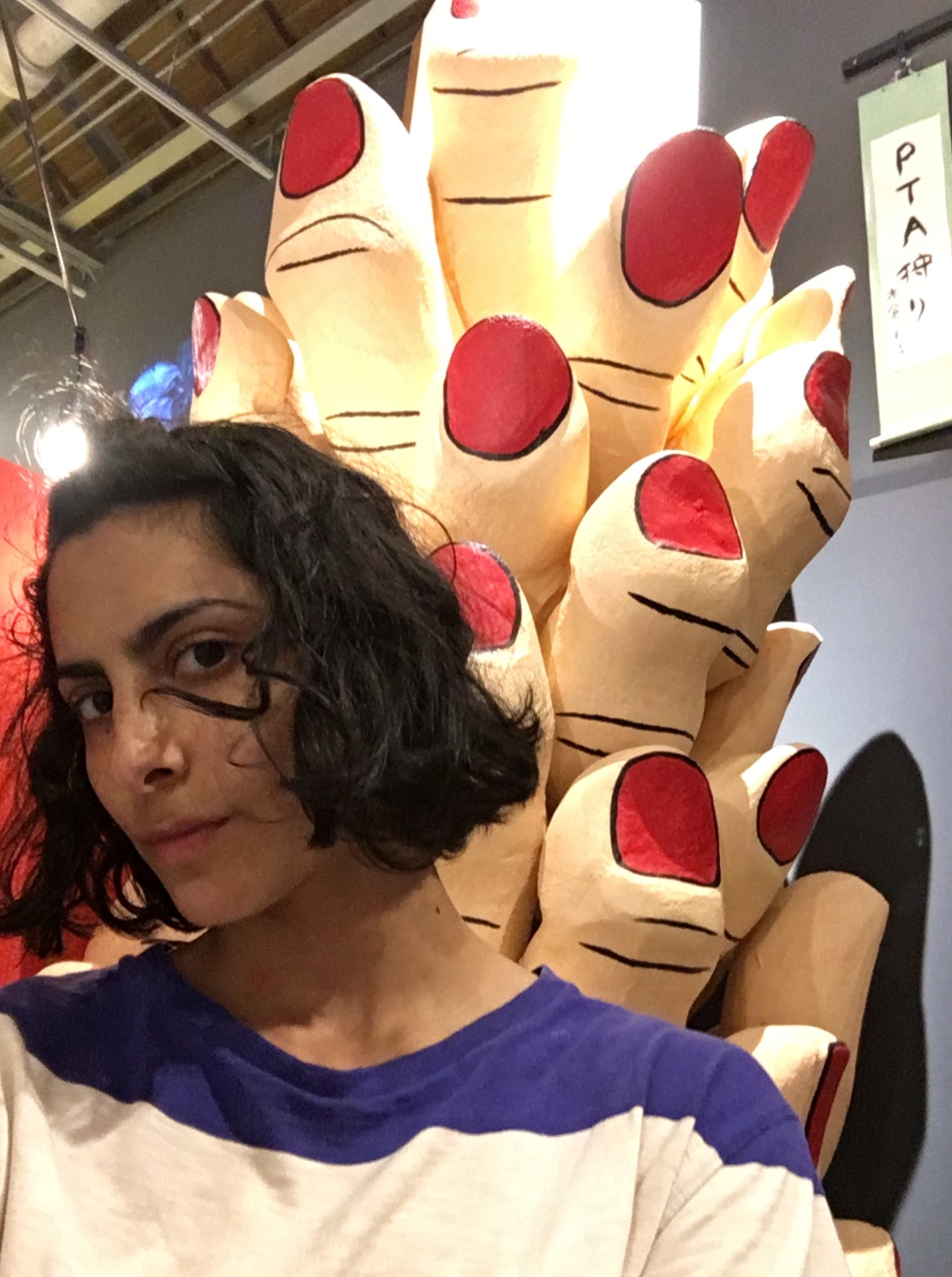 After the exhibit, we continued to stroll around the park and see everything it had to offer. The atmosphere is so pleasant here. People sat in cafes talking and listening to multiple musicians strum their guitars and lure crowds.

As we were trying find a place to eat, we came across this building and I had to check it out. I mean, look at it. The Guanghua Digital Plaza is the go-to place if you’re interested in computers, electronics, and video games. After a quick walk-through, we then ate dinner at an Indian restaurant (not pictured).

End of the Day

Peter and I ended our day at a hilariously horrible foreigner bar. Think Taco Mac in Taipei. To make up for how much it sucked, we split a pitcher of Tai P.A. from Redpoint Brewing. As the pitcher dwindled, Peter and I drew worse and worse caricatures of each other in “The Simpsons style.” I think the beer gave us enough energy for one last stop: a night market. I don’t remember which night market we went to, but we weren’t there for long. 8 minutes after our arrival Peter looked at me and said, “you’re tired, let’s go home now.”

We had such an eventful 12 hours. I’ve definitely learned how much we can accomplish by waking up 1-2 hours earlier!

This site uses Akismet to reduce spam. Learn how your comment data is processed.